The Preview view provides insight into how the skeletons may look at runtime, and it is not cluttered with bones, the current selection, or other UI elements shown in the editor area. It allows to preview animations using many of the same controls that are available at runtime, including modifying the setup pose and animations while the preview is running. 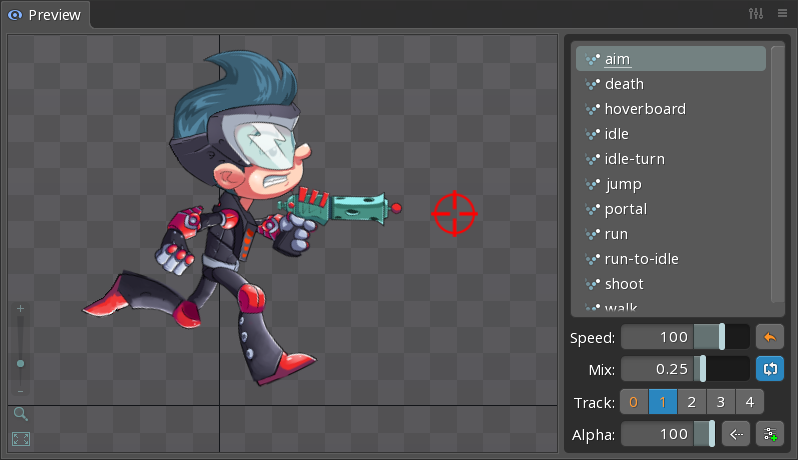 The small icon to the right of the view tab hides the animation panel to leave only the skeleton visible.

Controlling what is displayed in the Preview view works the same as the editor area. Right click to pan. Mouse wheel or use the zoom slider or buttons to zoom. 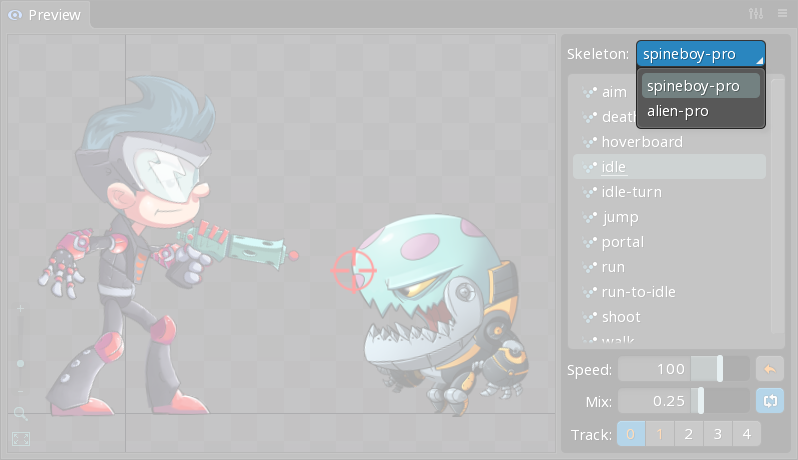 All animations are listed for the currently selected skeleton, just as they appear in the tree. If a project has multiple skeletons, a select box indicates for which skeleton the animations are being shown.

Clicking an animation sets it as active. Note that an active animation is underlined.

The Speed slider controls the playback speed. This is often useful for playing an animation slower than normal to be sure that there are no errors that would be hard to see at a faster speed.

The playback speed affects playback of all skeletons and animations equally. It is not saved, exported or available at runtime, though the code that applies an animation at runtime is free to use its own speed multiplier.

The orange arrow resets the playback speed to 100%.

The Mix slider sets the mix duration to crossfade the next selected animation. Selecting the run animation from the animtions list, then selecting the jump animation will take 0.25 seconds to switch from one animation to the next.

The loop button enables or disables the looping of the animation on the currently selected track.

The Alpha slider controls how much the track is mixed with the tracks below it.

While simply adding an animation to a different track overwrites the one in the previous track, Alpha adds the possibility to control and continuously mix the two animations instead of replacing one with the other.

Enabling Additive will mix the selected track additively with the tracks below it. This means that instead of overwriting animations on lower tracks, it will add the values of the active animation to the previous tracks.