To use the spine-ue4 runtime in your Unreal Engine project:

View the samples Build.cs for a full example.

You can inspect the C++ code of both your game and the spine-ue4 runtime by opening the project in the Unreal Engine Editor and selecting File -> Open Visual Studio or File -> Open Xcode.

The spine-runtimes/spine-ue4 directory is a project ready to be opened in the Unreal Engine Editor.

To explore the spine-ue4 runtime samples:

You can inspect and modify the C++ code of both the samples and the spine-ue4 runtime by opening the project in the Unreal Engine Editor and selecting File -> Open Visual Studio or File -> Open Xcode.

Once you are sure you want to update to the latest spine-ue4 runtime: 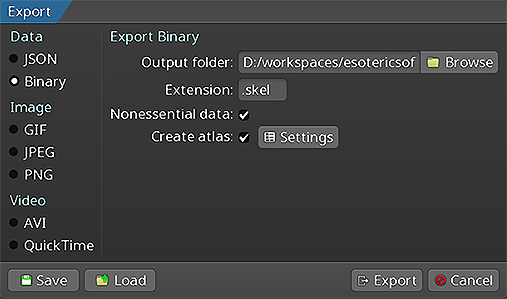 An export of the skeleton data and texture atlas of your skeleton will yield the following files:

The spine-ue4 runtime can import these files into special Unreal Engine asset types.

The asset importer will create Unreal Engine assets for the skeleton data and texture atlas automatically. The importer assumes the .atlas and .png files are located next to the .json or .skel file of your skeleton.

During development, you may frequently update your Spine skeleton data and texture atlas files. You can simply overwrite these source files (.json, .skel, .atlas, .png) by re-exporting from the Spine Editor.

The Unreal Engine Editor will detect changes to these source files and prompt you to re-import the assets from these source files. After re-import, all references to previously imported Spine assets will be intact and use the latest source data.

Note: The Unreal Engine Editor sometimes fails to recognize source file changes. In this case, locate your Spine skeleton data or texture atlas asset in the content browser, double click it, then select Asset -> Reimport from the menu of the newly opened window.

The skeleton data asset stores information about the bone hierarchy, slots, draw order, animations and other data that constitutes your skeleton. Other components provided by the spine-ue4 runtime reference and share this skeleton data asset to animate and display a skeleton as part of an Unreal Engine actor instance. 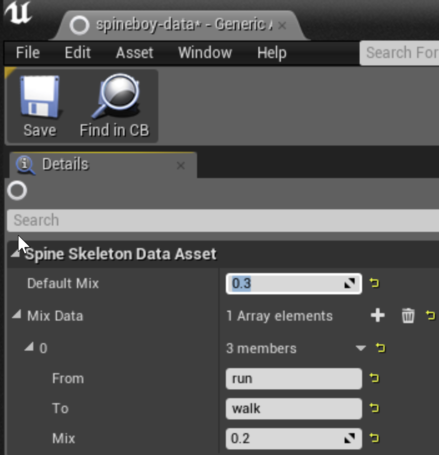 The skeleton data asset allows you to specify animation mix times. Double click the asset in the content browser, then enter the default mix time or define mix times for two specific animations by clicking the + sign on the Mix Data property of the asset.

Components using the skeleton data asset, like the skeleton animation component, use these mix times when playing back animations.

The detail view for a skeleton data asset also shows all bones, slots, animations, skins, and events contained in the asset. 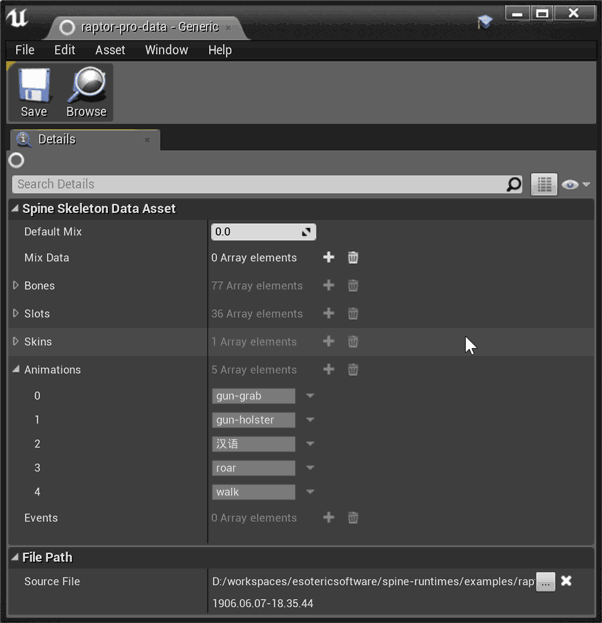 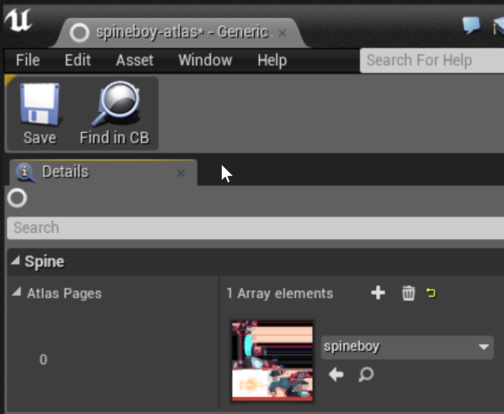 You can view the texture of the texture atlas pages when double clicking the asset in the content browser.

Note: You can modify the textures referenced by the texture atlas asset. In this case, make sure the UV texture coordinates stay valid.

The spine-ue4 runtime provides you with a set of components that allow to display, animate and modify skeletons exported from Spine. These components reference skeleton data and texture atlas assets you import as described above.

Adding a Skeleton to a Level

To quickly display a Spine skeleton in your Unreal Engine project:

You can now either use blueprints or the components' C++ API to animate the skeleton, react to events triggered by animations, etc. Refer to the component documentation below for more details.

Note: In order for the editor to render your skeleton, please turn on realtime mode in your viewport

The skeleton component stores references to a skeleton data and texture atlas asset and will update the world transforms of each bone in every Tick(). It serves as the base component for the skeleton animation component or your own custom component.

To set the skeleton data and texture atlas

Note: Both the skeleton data and the atlas asset references have to be set for the component to function properly. If one or both are undefined, the component will gracefully ignore all interaction via C++ and blueprints.

The skeleton component implements the UActorComponent::Tick() method in which it updates the world transforms of all bones of the skeleton.

The component exposes the multicast delegates BeforeUpdateWorldTransform and AfterUpdateWorldTransform as properties that allow you to intercept this life-cycle before and after the world transforms of all bones are calculated. You can bind to these delegates to modify bone positions and other aspects of the skeleton without having to care for the update order of your actors and components.

In the class that should intercept the life-cycle, add a UFUNCTION declaration to the class header file:

Note: It is important to mark the method as a UFUNCTION, otherwise it can not be bound to the delegate.

Next, add a definition of this function to your class' .cpp file:

Finally, bind the method to the delegate, e.g. in BeginPlay() of your actor or component. Assuming you have a reference to the AActor containing the skeleton component:

Binding to the AfterUpdateWorldTransform delegate works the same.

Binding to the AfterUpdateWorldTransform event works the same.

A Spine skeleton may have multiple skins that define which attachment go on which slot. The skeleton component provides a simple way to switch between skins.

To set an attachment, provide the slot and attachment name.

For procedural animation it is sometimes necessary to reset bones and/or slots to their setup pose. 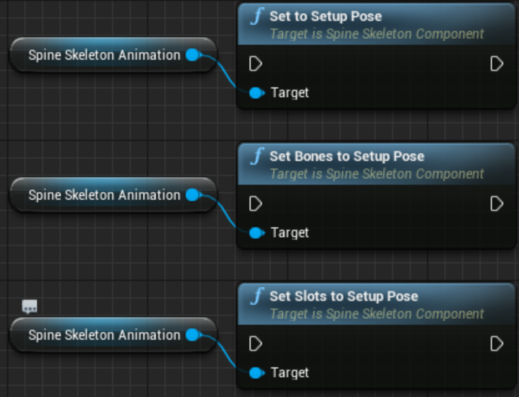 Flipping a skeleton vertically or horizontally allows you to reuse animations, e.g. a walk animation facing left can be played back to face right.

Getting and Setting Bone Transforms

The skeleton component lets you set and get bone transforms so you can implement IK terrain following or let other actors and components such as particle systems follow the bones in your skeleton. All transforms are given in the world coordinate system to make interaction easier.

Note: Should you require to modify the local transform of a bone, please use the spine-cpp runtime API in your C++ code.

Note: Make sure you apply new bone positions as part of the update world transform life-cycle, otherwise your modifications may be overwritten by animations.

Note: The Spine bone follower and Spine bone driver components are an easier way to interact with bones.

The skeleton animation component is the heart of the spine-ue4 runtime. It allows you to add a Spine skeleton to an actor, animate it, react to animation events, and so on.

The skeleton animation component exposes the AnimationState API to both blueprints and C++. This section assumes a familiarity with concepts like tracks, track entries, mix times, or animation queuing as described in the section Applying Animations in the generic Spine Runtime Guide.

To set an animation, provide the track index, animation name and whether to loop the animation- 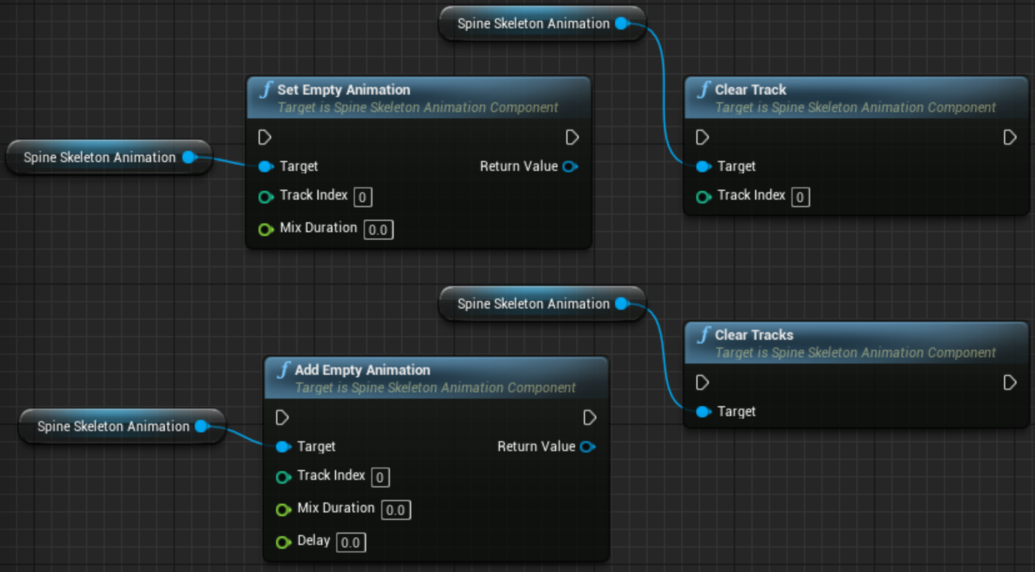 You'll receive a TrackEntry from all the methods/nodes that allows you to further customize the playback of this specific animation, as well as bind to delegates of track entry specific events. See the section Processing AnimationState Events below.

Note: The returned track entries will only be valid until the corresponding animation is removed from the underlying animation state. The Unreal Engine garbage collector will automatically free them. After a dipose event is received for a track entry, it should no longer be stored or accessed. The C++ wrapper around the underlying spTrackEntry guards against invalid access.

While animations are played back by the underlying AnimationState, various events will be emitted that notify listeners that

The skeleton animation component provides delegates to which C++ code or blueprints can bind in order to react to these events for all queued animations on all tracks. Listeners can also be bound to the corresponding delegates of a specific TrackEntry only.

In the class that should react to AnimationState events, add UFUNCTION declarations for the events you want to listen to the class header file:

In the corresponding .cpp implementation file, add the definitions:

Finally, bind to the corresponding delegates of a USkeletonAnimationComponent or UTrackEntry:

To bind to AnimationState events on the skeleton animation component:

To bind to the delegates of a specific TrackEntry: 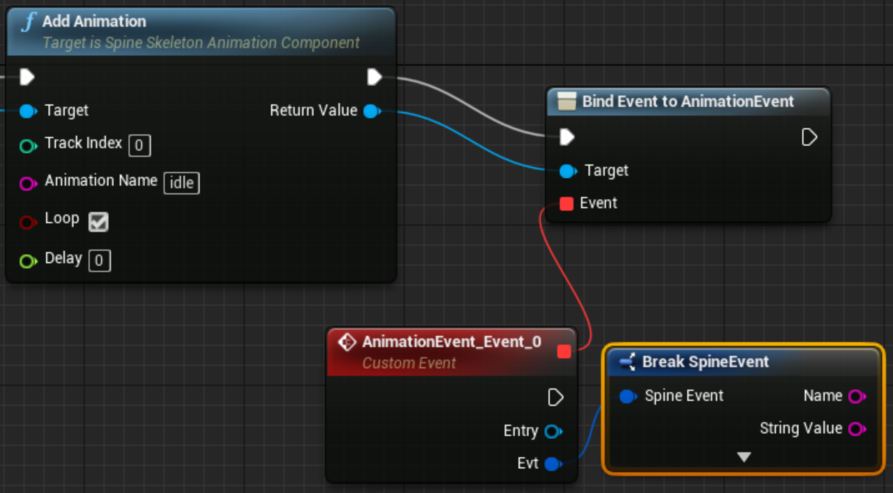 You can preview animations and skins in the UE4 editor viewports using the Preview Animation and Preview Skin properties of the skeleton animation component. Simply enter the name of the animation and skin.

The reset the animation or skin, set the respective property to an empty text.

The skeleton renderer component is responsible for drawing the current state of a skeleton or skeleton animation component on the same actor. Rendering is performed via a procedural mesh. The component uses the texture atlas asset referenced by the skeleton (animation) component to find the textures needed to draw the attachments of the skeleton. 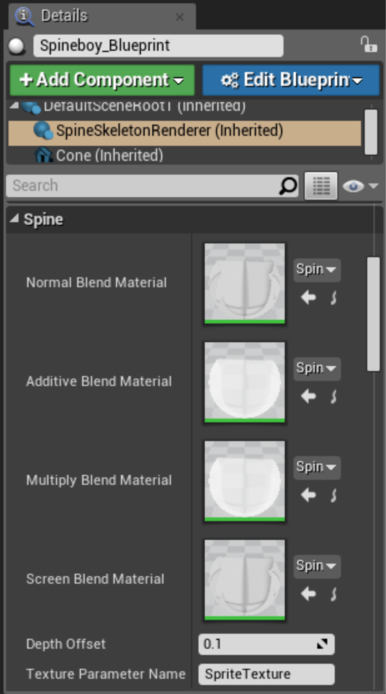 The skeleton renderer component has 4 material properties, one for each blend mode supported by Spine. By default, these 4 materials are set to unlit materials that are part of the spine-ue4 plugin (see the Contents folder of the plugin).

To modify the materials used by all skeleton renderer components, modify the default materials of the plugin. 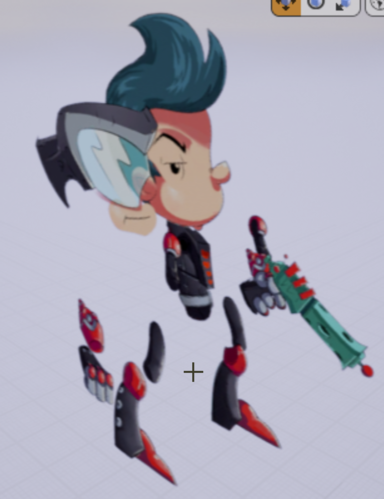 Attachments are rendered back to front in the x/z plane by the skeleton renderer component. Each attachment is offset by a customizable depth offset value on the y-axis to avoid z-fighting. The depth offset is freely customizable in both C++ and blueprints.

This component references a bone of a skeleton (animation) component and sets its own transform to that of the bone on every Tick.

Use this for use cases such as letting the user drag a bone of the skeleton around.

Since Spine 3.8, the spine-ue4 runtime offers the Spine widget for integration of Spine skeletons with your UMG UI. The widget has the same interface as the Skeleton Animation Component, for both blueprints and C++ code. The widget also shares some interface with the Skeleton Renderer Component, namely allowing you to set the depth offset between attachments, and changing the materials used to render the skeleton. Please refer to the sections on these two components for the details.

To add a Spine skeleton to your UMG UI, start by creating a new widget blueprint. Open the blueprint, then add a Spine widget to it via the palette. 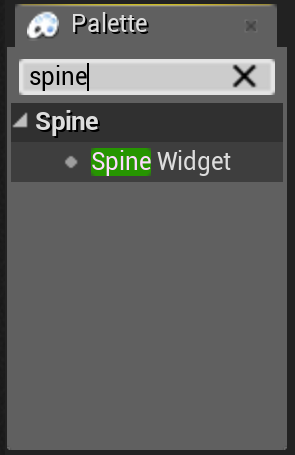 Next, set the atlas and skeleton data asset on the Spine widget, and resize it in the designer viewport to fit your requirements.

The skeleton will resize automatically, keeping its aspect ratio, filling as much space within the widget as possible. You can scale it further up or down by via the Scale property.

After switching from Design to Graph editing mode in the widget editor window, you can modify the blueprint of the widget. Here's an example blueprint:

We set the initial animation of the raptor widget when the Construct event is fired. We also need to wire up the Tick event with the widget's Tick function so it animates.

Finally, we need to open the level blueprint and add the UMG widget to the viewport:

In the blueprint, we first create the widget, specified by its class name, and then add it to the viewport.

spine-ue4's default materials use the translucent blend mode supported by Unreal Engine. For this blend mode to work with motion blur post processing, enable the OutputVelocity option in the material details.